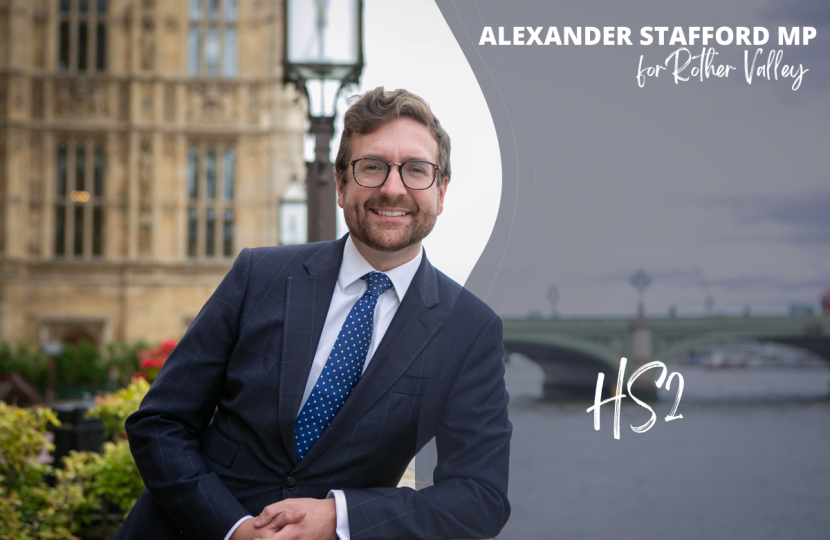 SINCE my election as Member of Parliament for Rother Valley, I have resolutely opposed HS2. It is a project which has been overwhelmingly rejected by my constituents, with over 8,000 of them signing a petition calling for the scheme to be scrapped.

Many are members of anti-HS2 action groups in villages such as Bramley, Wales and Aston. My seat feels so strongly about the project because 400 of our homes are set to be demolished and precious ancient woodland destroyed to make way for the new line – and there will not even be a stop in our area.

It is outrageous that we shall suffer all of the pain from this vanity project yet receive zero gain, with our beautiful countryside disfigured to benefit a small group of London business commuters travelling to Leeds.

However, the matter at hand is more fundamental than that. I have been vocal in arguing that HS2 runs counter to this Government’s levelling up agenda in areas like Rother Valley. We are told that HS2 is a critical part of levelling up, but this is quite frankly a fallacy.

The oft-quoted £150bn price tag for HS2 is sucking money and resources away from left behind communities in the North and providing them with no benefit in return. I have yet to see any evidence of HS2 being a force for good in Rother Valley, and that is because the case for this project in our area simply does not exist.

The people of Rother Valley are paying their share of £150bn for a railway line that runs from the capital to a prosperous regional city, targeted at a small, elite group of people, with journey times that are negligibly faster than they are currently and with no stops in our area or close by.

Recently I led a campaign to rejuvenate Rother Valley’s high streets with money from the Government’s flagship Levelling Up Fund, with £20m being the maximum grant available. It demonstrated how transformative this amount of money is for areas like mine and reinforced to me that HS2’s £150bn should be redistributed to Red Wall communities.

It is truly remarkable what we could do with just £15m, never mind the billions being spent on this project. I believe that levelling up means empowering local residents and amplifying their voices, and we have said loudly and clearly that HS2 must be stopped. If we do want to level up by improving transport connectivity, which I agree is of paramount importance, then we must focus on spending this money on first-rate regional rail, buses, and roads.

The residents of Rother Valley want reliable, frequent, and affordable buses to Sheffield, Doncaster, Barnsley and Worksop for employment, education, health, and leisure. They want the construction of the Northern Powerhouse Rail to link up the North’s major cities, creating a large metropolitan hub which can compete with London in terms of opportunity and prosperity.

Indeed, they want a fast trans-Pennine rail link to Manchester, which has been talked about for years. This ties in with my campaign to restore the South Yorkshire Joint Railway, linking together many of the region’s core settlements. They want well-maintained and fast roads between our towns and cities. They do not want yet another rail link to London, a city which the majority do not tend to visit regularly and when needed is easy to reach on an existing route.

Not only is HS2 a vast waste of money, but it is also a huge drain on resources. I hear from suppliers and construction companies that there are shortages of skilled tradespeople and materials such as concrete for other critical infrastructure projects. This is a direct obstacle to levelling up which must be addressed urgently.

Furthermore, at a time when the Labour-run Rotherham Metropolitan Borough Council is running roughshod over residents’ wishes by building houses on our precious green belt, HS2 is destroying perfectly good homes. This is not levelling up in action.

The writing is on the wall. HS2 is expensive, unnecessary, and unwanted, but most crucially of all it hinders our levelling up agenda. The 2b arm of HS2 must be cancelled immediately and not simply paused.

Fortunately, if reports are to be believed, this is what will happen. I welcome this but will not rest until my constituents, whose homes are being destroyed or compulsorily purchased, can be sure. Once scrapped, we can focus on the levelling up initiatives which really make a difference across the North.