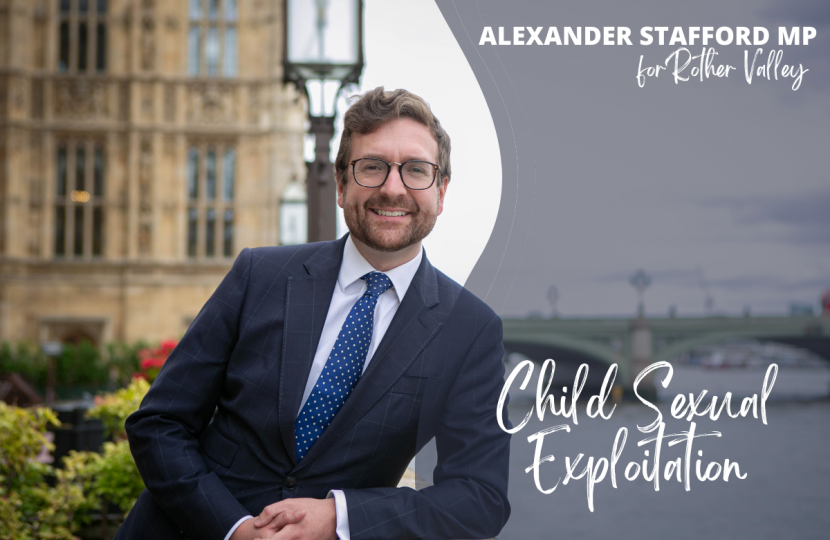 Recently, I met the leader of the Conservative group on RMBC, Cllr Emily Barley, and a campaigner and survivor of CSE in Rotherham. I heard from Cllr Barley and survivor Elizabeth about what the Conservative Working Group on CSE claims to have uncovered since it was formed in May 2021. What I was told has shocked and disgusted me.

The working group has found “multiple examples” of what they allege to be active grooming and CSE in “multiple locations” across Rotherham. Every piece of intelligence uncovered by the working group was passed to South Yorkshire Police, and examples were also passed to Rotherham Council. Locations include several public parks, allotments, car parks, private homes, fast food shops, a car wash, and a petrol station.

Hard hitting alleged examples of CSE mentioned in the briefing paper include teenage girls being given mobile phones by older Asian men and being picked up from a specific location after 10pm. Plus, claims of “girls being sold for sex” from a petrol station and a takeaway shop. Information about girls from Rotherham being taken by older Asian men to a fast-food restaurant, and then other men picking them up from there and taking them on to locations outside the Borough and across the north of England.

The working group felt that the response from Rotherham Council was “practically non-existent, and at times the working group has felt that various elements within the Council are deliberately avoiding talking about CSE”. The working group have been unable to find any proper actions taken by the Council, report some officers being reluctant to deal with cases, and have experiences timeframes of up to 3 months in escalating intelligence received.

The report also alleges failing by South Yorkshire Police, it “felt the Chief Superintendent does care about CSE and victims, but that nevertheless the processes within SYP are not effective or adequate”. Victims in Rotherham have been failed once before. My fear is that they are still being failed.

If you would like to read report, I strongly encourage you to do so here: https://www.rotherhamconservatives.org.uk/child-sexual...

The Rotherham Conservatives have therefore tabled a motion at the next full council meeting on 10th November, calling on the council to tackle this ongoing problem. I sincerely hope that all elected members will do the right thing and support the motion. Tackling the abuse of children is not a political issue, it is a moral one, and RMBC need to tackle Child Sexual Exploitation head on, with proper processes that are reviewed frequently.

If you wish to show your support to this motion, please SIGN my petition below, backing the motion to send a clear message to our local representatives showing them that we will never tolerate the abuse and exploitation of our children.