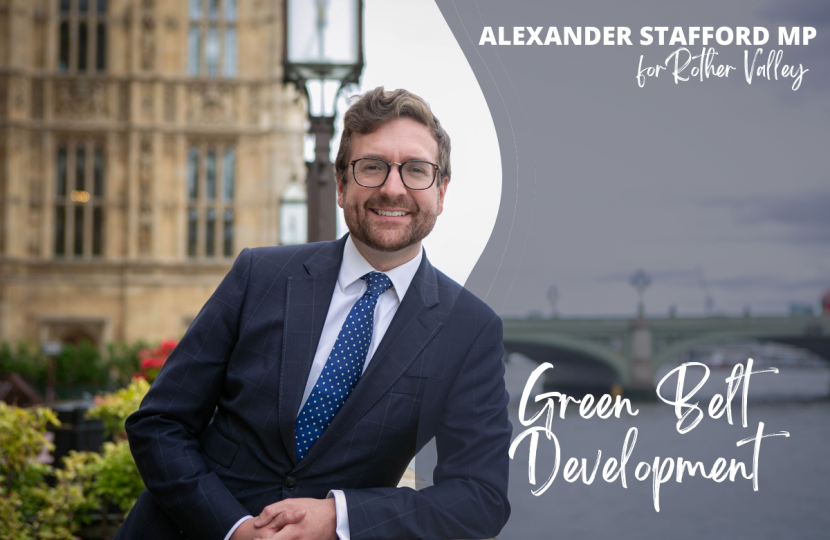 Since my election, many residents have contacted me about the destruction of the countryside and green spaces. Most of these developments are on land that was once Green Belt, but has had this protection removed by the council as part of the local plan process in 2012 and 2018.

Not only has this land been removed from the Green Belt, destroying the countryside and wildlife, but the Council ignored the serious concerns regarding flooding, traffic, wildlife and loss or recreational space– pushing this decision through.

The local Labour party like to blame others for these decisions. They like to take the credit for the affordable homes built and the money from the developers that they funnel into projects. Yet they do not like to own their decision to re-designate Green Belt land for development opportunities.

If Labour want to be in power locally, they should be willing to be accountable for their actions rather than continually trying to shift blame to central government. Anything positive they take credit for, while anything controversial they place the blame elsewhere.

The Labour Council claim that the Conservative Government is forcing them to build on Green Belt This is simply not true. Taking land out of the Green Belt is a local decision – that can only be done by the local authority when forming their Local Plan. National Planning Policy has strong protections for Green Belt land, and states that a Green Belt boundary may be altered only in exceptional circumstances.

Labour councillors do not support housing developments on the Green Belt in their wards. Local Labour councillors throughout Rother Valley are seemingly always willing to say that they object to building on the Green Belt when challenged by local residents. We have seen this recently in Throapham, Whiston and Dinnington before the election and more recently in Kiveton Park. They are playing lip-service to local residents, while continuing to support Rotherham Council’s Core Strategy (the local plan) – which was first adopted in 2012 and reviewed in 2018.

Labour say the Government’s planning reforms – Planning for the Future – will mean more Green Belt is built on. The planning reforms are being brought in to make the process of new housing more democratic - not to provide local residents with more input in local decisions.

We know that when Labour adopted the Core Strategy (local plan) in 2012 and reviewed it in 2018, the council went through the statutory consultation process. But, time and time again, I hear from residents that they had no idea that the land had been removed from the Green Belt, or that their voices were discounted. No one outside of RMBC believe that the consultation was anything other than a cosmetic exercise.

The new reforms which are planned would mean more democratic accountability and more say for residents when the Core Strategy is formed/reviewed. Holding the Labour council to account and not allowing them to hide behind the local plan in future when controversial planning decisions are made.

We want more homes to be built – the right kind of homes - affordable homes, more homes suitable for an ageing population – but we also want these to be built in the right places – and we want a planning system that is more transparent and more predictable.

The decision on what land to allocate for housing is entirely in the hands of the local council.

It is a question of do they prioritise developers building estates on former Green Belt – or do they promote building on brownfield sites. I want to see more of the latter.

For example, huge estates are being built around Dinnington and Throapham on former Green Belt land, while large brownfield sites such as the old timber yard have been left. We must build new homes, but this must be balanced. We must protect our Green Belt for future generations and listen to the views of local residents, who are too often dismissed as NIMBYs, while the interests of developers are prioritised.

I will always stand by residents who fight development of our countryside and any loss of recreational space.