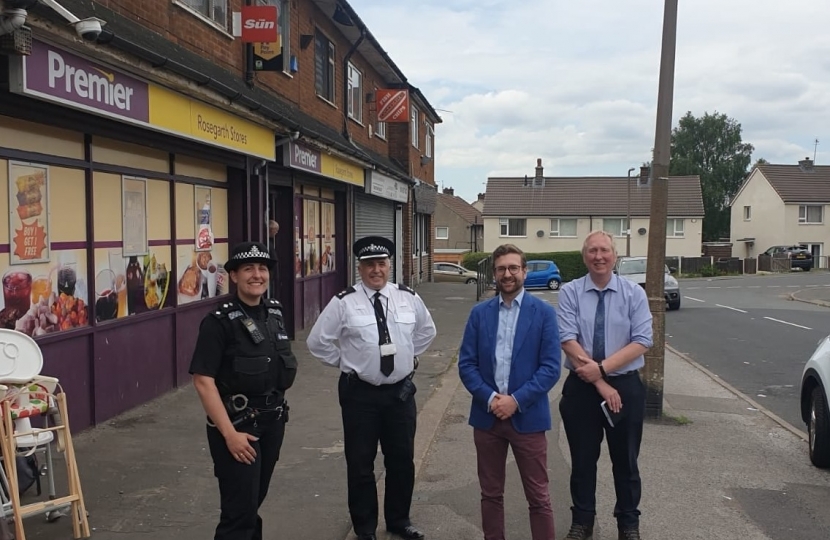 Alexander has long been an advocate of fighting crime in Rother Valley, setting up the Rother Valley Rural Crime Taskforce soon after his election in the December 2019 General Election. More recently. as well as continuing to advocate for a tougher stance on rural and all other types of crime , he has been campaigning for a more visible police force in towns across his constituency.

As part of this initiative, today he joined District Commander for Rotherham, T/Chief Superintendent Stephen Chapman, Rachel from SYP and Lewis from RMBC, for a foot patrol, meeting at Swallownest Health Centre and taking in Hepworth Drive and Lodge Lane, before taking in the shops on Rosegarth Avenue to speak to business owners and members of the public.

Crime and antisocial behaviour are huge issues for both my constituents and me, and I will continue to press the police for a more visible presence in our towns and villages.

We can clamp down on these issues, but only by working together, with our communities, and taking a tough, no-nonsense approach.

I will be going on regular patrols with the police in the future, and if residents would like me to visit a specific area in their neighbourhoods, I would certainly encourage them to email me at the usual address with details.

Anyone who wishes to email Alexander can do so at alexander.stafford.mp@parliament.uk.

Getting Tough On Crime