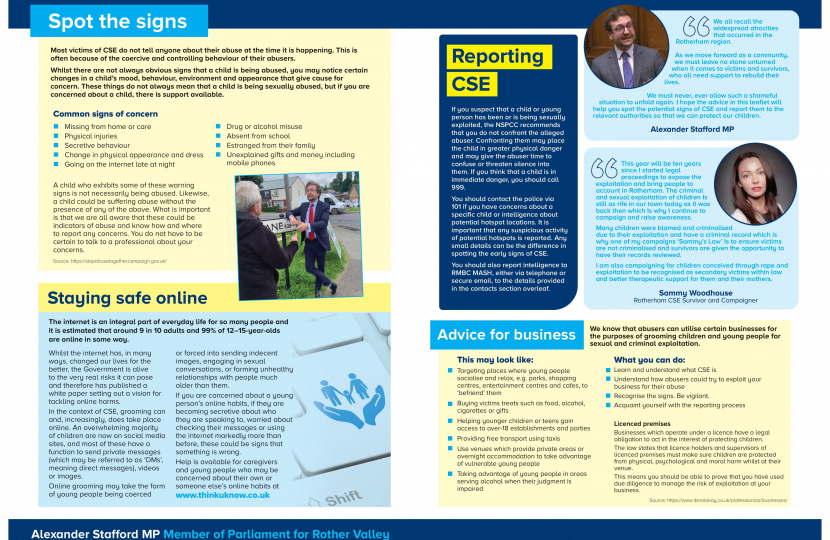 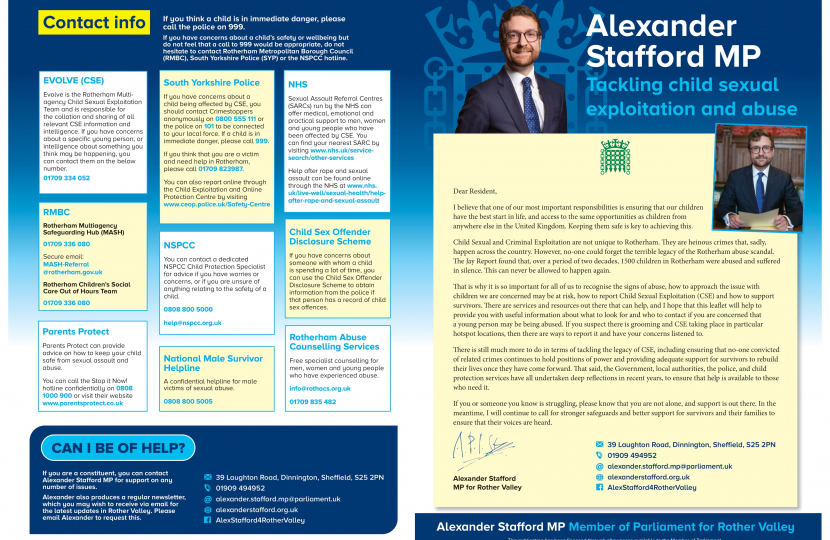 Alexander Stafford, the local MP for Rother Valley, has teamed up with CSE survivor and campaigner Sammy Woodhouse to produce an information leaflet on CSE.

The leaflet contains vital information on spotting the signs of CSE, who to contact for help and support, how to spot the signs of online grooming and how businesses can work together to stamp out CSE hotspots. It will be delivered to all homes within Alexander’s Rother Valley constituency during the next two weeks.

Ever since his election in 2019 Alexander Stafford has been fighting for the victims of Rotherham’s CSE scandal and working to ensure that this never happens again. Keen to work alongside victims to amplify their voices and shine a light on their experiences, Alexander has been campaigning for a specific Child Criminal and Sexual Exploitation Commissioner alongside Sammy, and has called for former Rotherham Labour Peer Lord Ahmed to be stripped of his peerage following his conviction for sexual offences against children.

“What happened in Rotherham was horrific, and I am determined to ensure that we all learn from the mistakes that were made here. This means that we all need to know how to spot the signs, and work together to prevent something as shameful as the Rotherham abuse scandal ever happening again.

I am pleased to have worked with Sammy on this leaflet and I hope it helps people become alive to the threat posed by CSE and equip them with the knowledge to spot and report it. There are other elements to CSE now and the threat of online grooming has grown tremendously, so we all need to know how to keep our children safe.”

“The criminal and sexual exploitation of children is still as rife in our town today as it was back then which Is why I continue to campaign and raise awareness.

Many children were blamed and criminalised due to their exploitation and have a criminal record which is why one of my campaigns ‘Sammy’s Law’ Is to ensure victims are not criminalised and survivors are given the opportunity to have their records reviewed.

I am also campaigning for children conceived through rape and exploitation to be recognised as secondary victims within law and better therapeutic support for them and their mothers.”

The leaflets will be delivered this week. Any constituent of Rother Valley who has not received on by 8 April 2022 should get in touch with Alexander via email to request a copy alexander.stafford.mp@parliament.uk

Alexander Stafford MP has welcomed the Conservative Government’s decision to give councils £125 million to provide vital support services for domestic abuse victims in 2022-23, taking the total support to date to £330 million.