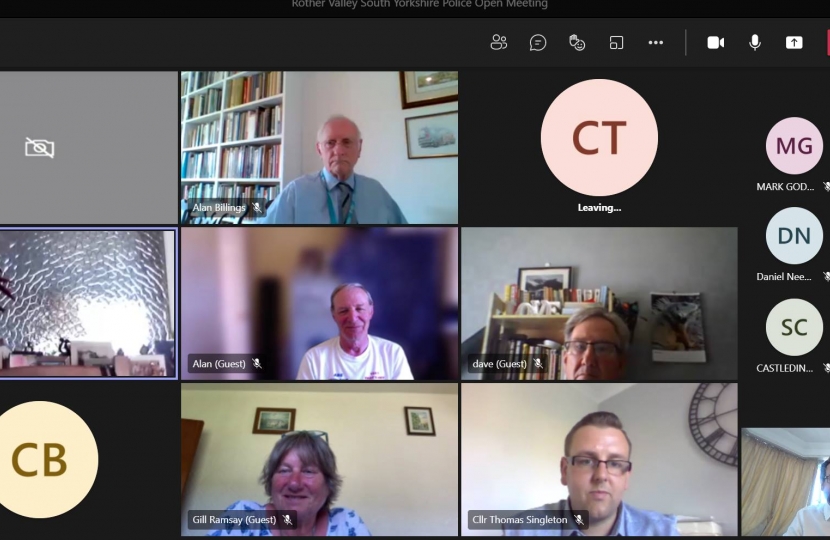 Alexander Stafford, local MP for Rother Valley and a longtime campaigner for a more visible police force and a tougher stance on crime, today hosted a virtual open session for his constituents with South Yorkshire Police officers and the Police and Crime Commissioner for South Yorkshire, Dr Alan Billings.

Attended by over 30 residents, the meeting was an opportunity for Rother Valley constituents to put questions on matters of concern relating to crime and policing to recently re-elected Dr Billings and officers covering the Rother Valley area.

A wide-ranging discussion ensued, covering a varied range of topics from antisocial behaviour to vehicle crime and drug abuse to police visibility. The need for a more visible police presence with a static base, was again raised by a number of attendees.

I am grateful to Dr Billings and the officers who attended my open session for giving their time to address some concerns held by my constituents in Rother Valley.

There are a number of longstanding concerns, particularly around antisocial behaviour and the need for a police presence in our towns, that constituents wanted the chance to ask officers about, as well as a number of operational queries relating to the areas where they live.

I hope that this meeting was a good forum for addressing these concerns and I very much look forward to hosting future such events with the police force in the future. By working together, we can make our area a safer place to live, and I think with community engagement, this is something we can achieve.

Getting tough on crime

In the past week, I have been contacted by several concerned constituents raising the rights of women against trans rights.