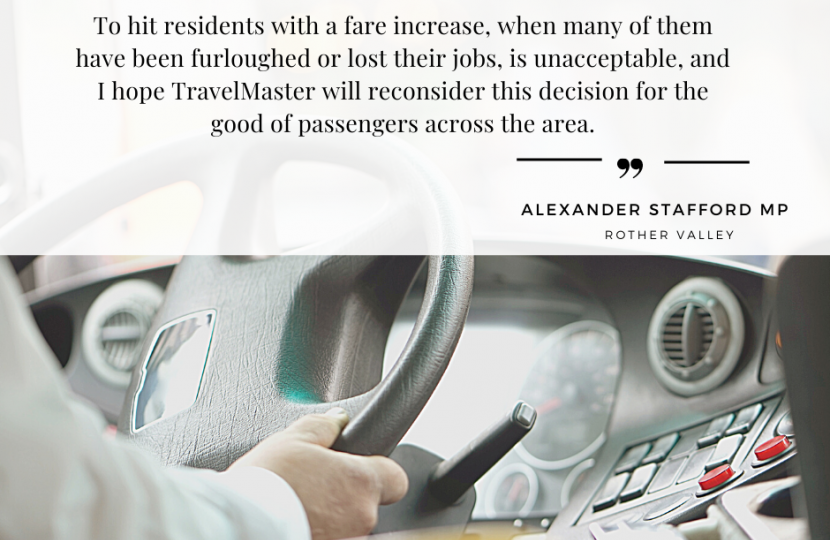 Alexander Stafford, local MP for Rother Valley, has spoken out against plans to increase travel fares on some bus, train and tram routes in Rother Valley from next month.

The move will see fares increase by up to 5% next month, with many of those who regularly use public transport affected.

A fervent campaigner for better local transport provision in Rother Valley since his election, Alexander has written to the Managing Director of TravelMaster, Matt Smallwood, opposing these proposed fare increases and urging him to instead focus on improving links within the constituency.

Now is categorically not the time to increase fares on public transport. I recognise that, like all other industries, public transport providers have been hit by the pandemic, but let us also remember that they have received significant funding from both regional and national government in order that they can keep providing this essential services.

To hit residents with a fare increase, when many of them have been furloughed or lost their jobs, is unacceptable, and I hope TravelMaster will reconsider this decision for the good of passengers across the area.

The contents of Mr Stafford's letter are as follows:

I am writing on behalf of my constituents in Rother Valley in response to the announcement that TravelMaster are applying a 5% increase to ticket fares in South Yorkshire.

I ask that you inform the Board of Directors of the anger in the local community to this announcement and ask that it be urgently reconsidered.

Many of my constituents in the towns and villages across Rother Valley are reliant on public transport for work and education, including many key workers. They have been, in the most part, understanding, patient and supportive of the changes to the services and the many inconveniences that have been caused during the last year. However, that patience is wearing thin. People want to see not only a full restoration of services, but demand improved services, cheaper tickets, better reliability and increased frequency.

When I speak with my constituents who have either stopped using public transport due to cost and reliability, or to people who want to make the switch away from private cars, the common theme is that services must improve. Reliability, punctuality, frequency and affordability, must be addressed. Transport companies cannot justify an increase in fares, until these are answered and a major improvement plan put in place.

Increasing prices is short-sighted and is not the way to attract more people on to the public transport network.

Let me be clear, this is not just the responsibility of TravelMaster and the associated transport companies, this must be led by the Mayor of the Sheffield City Region Combined Authority. Some of the most deprived areas, the most reliant on public transport for accessing employment and education opportunities, are being let down by the regional policy. Maltby, Dinnington, Thurcroft, Treeton and Swallownest, deserve better services. Until these are delivered, I ask that the Board of Directors reverse the announced fare increase.

North Anston & South Anston are two villages in the southeast of the Rother Valley constituency, with a combined population of roughly 9,000 people. The area’s history dates back over a thousand years, and its name means “single/solitary stone” in Old English.

Wales is a small village in the southwest of the Rother Valley constituency with a population of over 1,000.

Kiveton Park is a village in the southwest of the Rother Valley constituency with a population of just over 7,000 people. It was founded by the Anglo-Saxons before the Norman conquest, and its name comes from an Old English word for “the settlement in the hollow”.

Harthill is a small village and Woodall a hamlet in the south of the Rother Valley constituency, with a combined population of roughly 2,000 people.