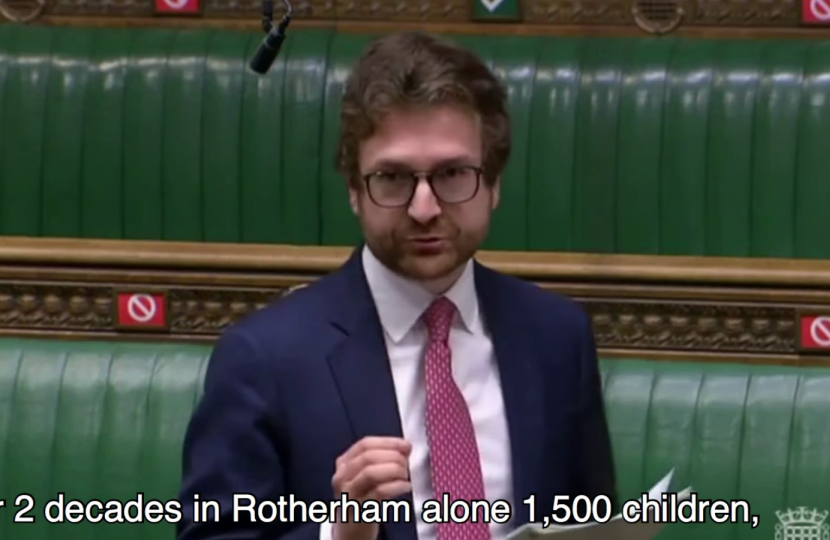 Conservative MP Alexander Stafford spoke up for the victims of the Rochdale child sexual exploitation gang in Parliament during the landmark debate on grooming gangs operating in the UK on Wednesday 3rd February.

Over two decades 1,500 children, some as young as 11, were raped in Rotherham.

Alexander pledged no stone would be left unturned when it came to justice for the victims and their families and urged colleagues on all sides to back Sammy’s Law.

Sammy’s Law is a Bill named after Rotherham child exploitation survivor Sammy Woodhouse. This Bill would pardon child sexual abuse victims for crimes they were coerced into committing and also remove the crimes committed by the children from their criminal records.

Alexander described Sammy’s Law in Parliament as just one way in which the government must try to right the wrongs of the past.

He also called on colleagues to ensure that members of the local authorities that enabled the abuse for so long were removed from their positions.

“As a country, we must be able to protect our children and young people before they fall prey to these despicable grooming gangs, and I praise the Home Secretary for her department’s publication of the Tackling Child Sexual Abuse Strategy.

“We all remember the widespread atrocities that occurred in the Rotherham area and the silent complicity of the local authorities. We must never again allow those who permitted and enabled such monstrous acts to hold any authority in our society. No stone can or will be left unturned in bringing these criminals to justice.

“Passing Sammy’s Law will be the first step on the long road ahead to achieve real justice for the victims and their families. What happened in Rotherham is a mark of shame that we as a nation shall ultimately all bear until every perpetrator and enabler faces justice.”