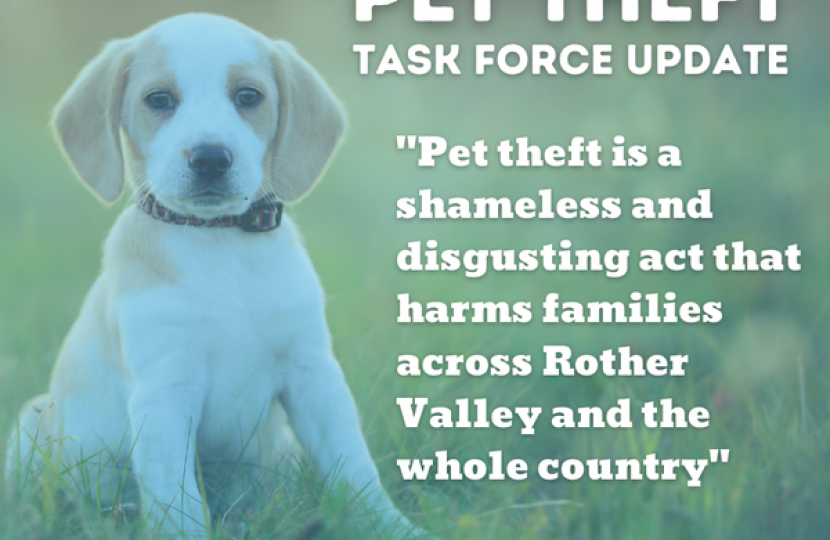 Pet theft is a shameless and disgusting act that harms families across Rother Valley and the whole country. As an animal lover, I fully understand the deep distress caused by the theft of a much-loved pet and the importance of dealing with such crimes. The Government's Pet Theft Task Force has been assembling evidence, considering the issue from end to end, including causes, reporting, enforcement and prosecution.

Although theft of pets is currently illegal, I believe more should be done locally including by the Police and Crime Commissioner (PCC) for South Yorkshire by having a dedicated police officer responsible to pet and dog thefts, which is what neighbouring Nottinghamshire Police has. All reported pet theft crimes should be taken seriously, investigated and, where appropriate, taken through the courts and met with tough sentences.

I have spoken about this in Parliament (https://www.theyworkforyou.com/debates/...), as well as writing in the Worksop Guardian (https://www.facebook.com/AlexStafford4RotherValley/posts/475440470570537), with the aim of putting pressure on the PCC to follow Nottinghamshire's lead.

I have also been working with Dogs Trust Puppy Smuggling Taskforce (https://www.facebook.com/AlexStafford4RotherValley/posts/465664058214845) and the Kennel Club to cut down on this heinous crime.

I have raised the issue of pet theft on several other occasions in Parliament this year. My contributions can be viewed at:

I am also one of the primary supporters of the Pets (Microchips) Bill in Parliament, that if it will become law will require the compulsory checking of microchips by veterinarians.

It is important that all aspects of pet theft are considered, including whether making pet theft a specific offence will have the desired deterrence effect. This is currently being considered by Parliament (and Labour played politics by jumping the gun by trying to pre-empt an official commission), but it is important that pet theft must be tackled by a range of measures looking at everything from the causes through to prosecution

The Government is not just looking at the consequences of pet theft, but ways in which the black market in the trade in animals can be dealt with. Lots of ideas and initiatives merit serious consideration as to how to prevent the incentives for this sort of despicable crime from occurring in the first place. This is the work that the Pet Theft Task Force is currently doing.

The Blue Cross has published detailed guidance for pet owners on how they can protect their animals from theft, which I advise all pet owners to read. https://www.bluecross.org.uk/.../protect-your-dog-against...

We are a nation of animal lovers and I am proud of this Government’s commitment to further strengthen the UK’s position as a global leader in animal welfare standards and come alongside other measures including taking steps to end live animal exports and crack down on the illegal smuggling of dogs and puppies. Now that we have left the EU, the UK has new freedoms to further strengthen animal welfare standards and reinforce its position as a global champion of animal rights. We are building on our existing world leading standards by recognising animals as sentient in law and committing to a range of new game changing welfare measures to protect pets, livestock and wild animals.

I will keep you updated on the work of the Pet Theft Task Force, which is due to report their recommendations for tackling this wicked and cruel crime later this summer.

Getting Tough On Crime